What is a Fedimint

A Fedimint - or "Federated Mint" is an implementation of Chaumian eCash with a federation of guardians to custody funds, instead of a centralized actor, and is natively interoperable with Bitcoin's Lightning Network.

The user experience of a Fedimint is designed to be similar to that of a custodial lightning wallet (e.g. Wallet of Satoshi) with the advantage of strong privacy for the user from the federation guardians, and a native backup scheme for a user to recover their funds from the federation.

It is anticipated there will be multiple federated mints deployed globally in both small and large community instances.

The open protocol enables communities of Bitcoiners to come together at their own discretion, assist each other with their custody and backup arrangements and make lightning payments through a privacy preserving wallet. 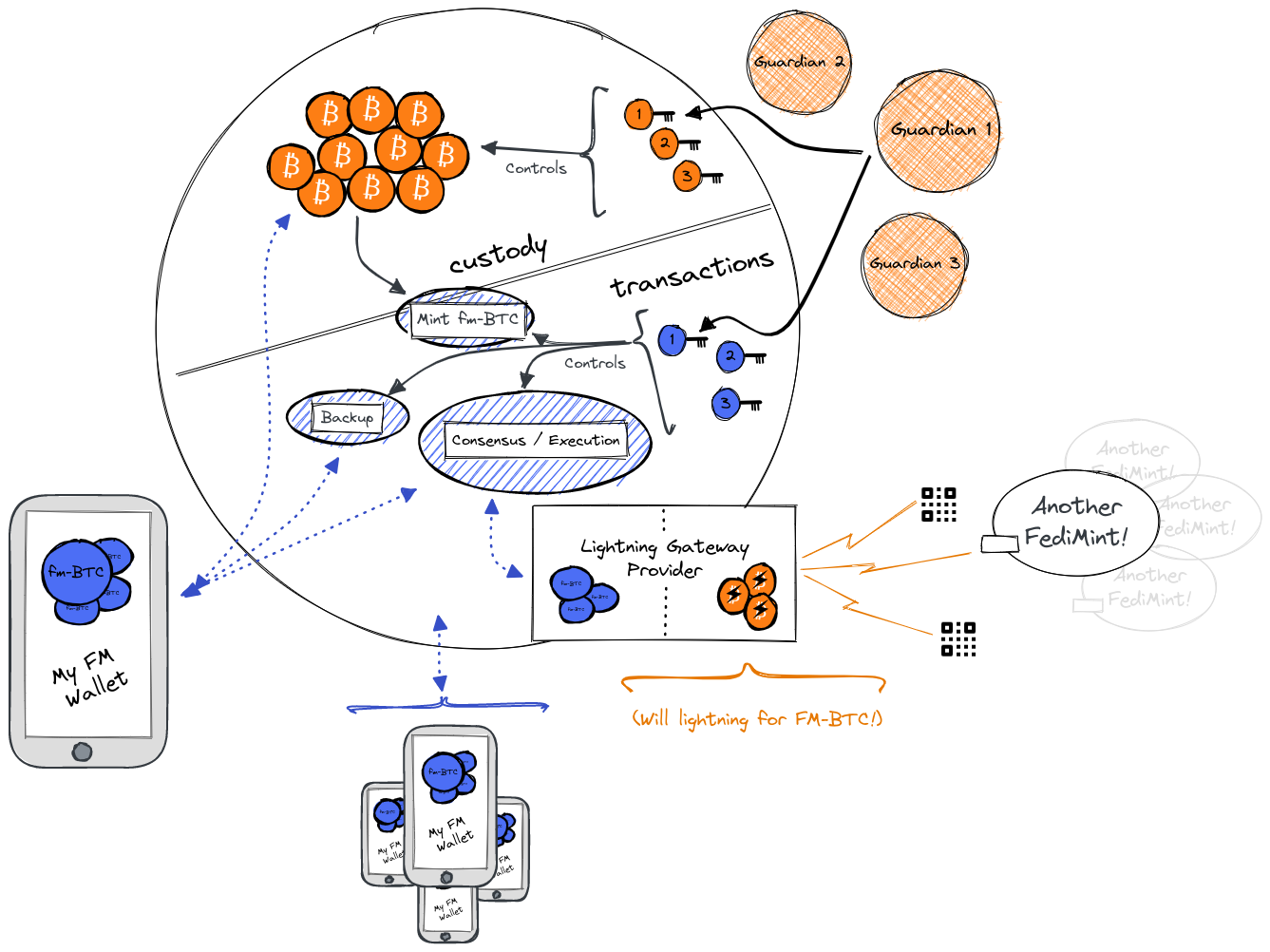 All of these are supported by three core technology components, discussed in greater detail in "Overview > Technologies used in Fedimint".

Fedimint guardians are the technical community members responsible for setting up and running the Federated Chaumian eCash system. They custody and backup funds and are responsible for the minting and redemption of eCash notes, that are claims against the Bitcoin reserves. A fedimint member is explicitly trusting that the federation guardians will not form a majority quorum to collude to steal user funds.

The federation guardians are specific roles within the system that can only be added or removed with consensus of the existing set of guardians.

We assume no specific technical knowledge in order for Fedimint users to send and receive Bitcoin through the Fedimint model. Our initial usecase for Fedimint is as an extremely private, federated custodial wallet.

In principle anyone can become a Fedimint user as long as they have access to the onboarding link / QR code. The onboarding process itself is subject to the specific implementations by the Federations.

The money "fm-BTC" held by the user are actually "digital bearer certificates" or "eCash notes" stored on the users phone.

These are not account balances but equivalent to digital banknotes of specific set values. As these are digital, they can be encrypted and backed up.

The Lighting Gateway is a Fedimint User who also runs a lightning node.

A federation may opt to run its own lightning gateway as well, but we have intentionally architected Fedimint such that any user can act as a lightning gateway to interact with the broader lighting network outside of the mint.

To receive a payment, the Fedimint User broadcasts a tweaked invoice to the lightning gateway. The User reveals the tweak, allowing the gateway to receive the lightning payment, in exchange for eCash notes.

There will need to be a market discovery process, by which users of a Fedimint are able to contract with the Lightning Gateways, the specifics of this is still to be documented.

It is anticipated there will be a process by which a Lightning Gateway registers it's service with the federation to ease discovery, but it would also be possible to have multiple unannounced gateways that users could contract with directly.